Could have Burma been French rather than British?

This article is a revised version of an article published under the title of « To stop London: Inquiring into the little-known history of the French in Burma » in The Myanmar Times, Issue 732, June 9-15, 2014, p. 48-49. 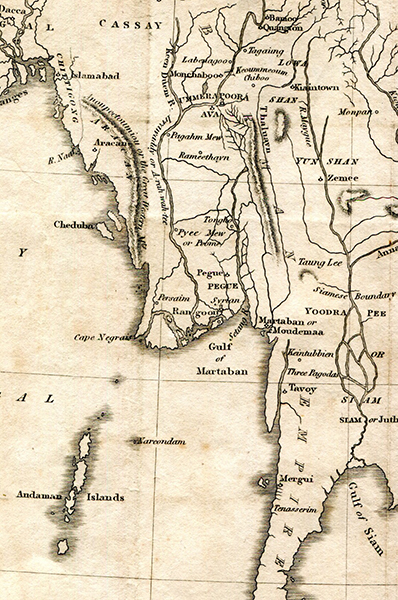 For more than a century (1824-1948), Myanmar, a protectorate attached to the British Raj on January 1st, 1886, came under progressively extended British rule. But did the « Golden Land » have no relations with France, Britain’s primary rival in the worldwide colonial competition of the 19th century? The old, almost unbroken and multi-faceted France-Burma relations have, on the contrary, been much richer than usually known.

From time to time you might hear a French person assert – with an edge of bitter, nostalgic regret – that Myanmar was very nearly a French colony rather than a British one. Would France have colonized Burma for better or worse? Would Yangon look like Hanoi today, with an opera house and different city planning? For France and Britain, the stakes were high: Around which language would the region integrate? But did Burma, pulled by the British Raj in the West and French Indochina in the East, have a choice?
Forgotten intrepid characters people the rather poorly known history of the France-Burma relations. The pioneering Franciscan Father Pierre Bonfer is recorded as the first French settler in Pegu Province (Bago Region) among the Mon. Burma was not a united country yet. Father Bonfer served in Pegu from 1554-1557 as the chaplain of a small community of about one hundred Catholic Portuguese, who opened a trading post in 1519 in Martaban (Mottama, Mon State). Indeed, the first Westerners who appeared in the 16th century in Burma were missionaries and merchants, mainly Portuguese: These great sailors crossed Western Asia, Persia and India to reach Burma.
A century later, French Bishop Pierre Lambert de la Motte, a founding member of the Paris Foreign Missions Society, created in 1659 independently from the Jesuits, arrived in April 1662 in Myeik (Tanintharyi Region), which belonged to the Kingdom of Siam. These first steps could have opened a lasting French religious influence in Burma. But the presence of French catholic missionaries in Burma finally remained rather occasional, compared to the more massive Anglo-Saxon Baptist Protestants.
Instead, maritime power topped France’s interests in Lower Burma. Attracted by the harbours along the Burmese coast in the 18th century – Burma is easier reachable by sea then, Joseph-François Dupleix, who arrived in 1720 in Pondicherry, India, as a member of the French establishment in India before being General-Governor of French India (1742-1754), quickly understood the importance of Burma’s harbours in building a wide naval strategy in the Bay of Bengal.
To that end, Chevalier Pierre de Milard (1736-1778), a navy officer called « Captain of the Feringhis » (« Captain of the French ») by the Burmese, significantly increased France-Burma relations through service as an officer in the Royal Burmese Armed Forces. Indeed, Milard fought for the Konbaung Dynasty (1752-1885) – the last dynasty who ruled Burma after three Anglo-Burmese wars (1823-1885) – against Siam and China. Milard served as well as an unofficial ambassador by reopening political and trade contacts between France’s King Louis XV and the Burmese Kingdom. Indeed, France wanted to counter the British influence in India. In this prospect, a French naval garrison was reinstalled in 1770 in Rangoon harbour and Burma sought weapons for its struggle against threatening neighbours. A mutual interest blossomed. The valiant French chevalier was rewarded with the title of Baron-Governor of Tabe (Sagaing Division) for his efforts, before being buried near the village of Ngayabya (Sagaing Division). 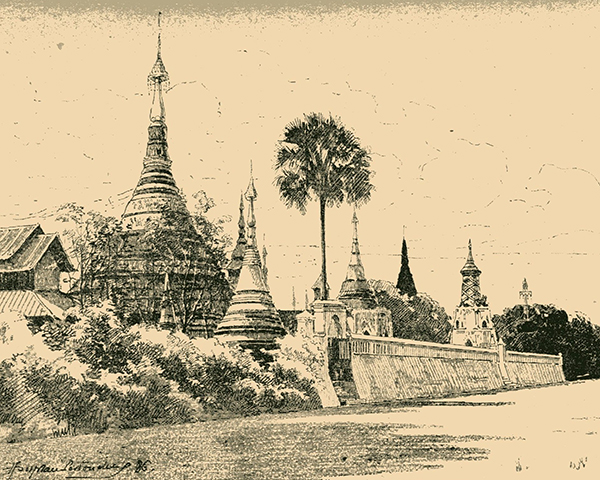 Captions of the illustrations: